Posted on July 30, 2010 by Defensive Driving | in Helping You Drive Safely

Have you ever been driving down the road and seen someone in another vehicle flip out at someone else on the road?  While I have been trained extensively to drive defensively, I cannot help but want to aid the frustration caused to the angry driver. 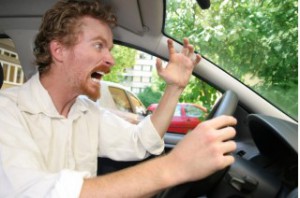 I should explain…this morning on my drive to work, in my rear view mirror, I could see a van speeding through traffic behind me.  Of course, there usually is never a clear path to get out of the congested area of cars but there is always someone who thinks they can beat rush hour traffic even if they leave the house when EVERYONE else starts their commute (isn’t that why it’s called RUSH HOUR).

Anyway, when this man got beside me I looked over and he was boisterously waving his arms and yelling at the driver in front of him.  Now, if you are not either of the driver’s in this scenario, it is crazy to watch these events transpire.  The van man now starts flipping out because he cannot weasel his way in front of the traffic.  I am driving a little in front of him in the left lane and saw him now get so angry at the car behind me because this driver didn’t allow him to cut over to the left lane.  Eventually, I lost sight of the angry driver.

Now even though this man didn’t practice mature driving, I am sure if you asked him, he was “in the right” during our commute.

If I am driving and get upset because someone is in front of me, I always think to myself, ‘Well, Sherry, you should have left a minute earlier.’  This helps me.  Additionally, the award-winning film, Wheels in Motion produced by DefensiveDriving.com provides useful information regarding aggressive driving and distracted driving.

It’s always easy to judge other driver’s, but remember, to other driver’s I may just be the jerk behind the wheel.  Drive safely!