How A Car Engine Works- Part 1

Posted on July 21, 2010 by Defensive Driving | in Defensive Driving Tips
The car engine is the heart, or perhaps rather the stomach, of the car. In the engine, gasoline is burned to produce energy; this energy is then converted into motion. An engine has a number of components that work together to ensure this intricate piece of machinery continues to function smoothly.
First, there are the cylinders, in which gasoline is converted into energy, which is then harnessed to move the car.
Next, there are the valve train, which regulates the intake of fuel and the output of exhaust, and the ignition system, which insures that the spark plugs ignite the fuel in the cylinders at the correct time.
Engines also have a starting system, which consists of a separate, electric powered motor that is used to get the car going.
The cooling, exhaust, lubrication, and fuel systems respectively make sure that the engine doesn’t overheat; exhaust is filtered and released; all parts receive necessary oil; and the proper fuel mixture is injected into the engine.
Let’s start with the cylinders.
Basically, a car engine is a kind of internal combustion engine. This essentially means that a fuel-air mixture is burnt inside a closed chamber in order to produce mechanical motion. In a car, this process occurs inside a cylinder.
You may have heard of “V6″ engines. This refers to the number of cylinders contained in the car engine; in a “V6″ engine, there are six cylinders that are arranged in a “V” configuration, with three on each side. Historically, American automakers have tended to prefer V6 engines. However, Japanese makers began using highly efficient 4-cylinder engines in the 80s and 90s; these engines are often more fuel-efficient and produce lower Carbon emissions. V6 and four-cylinder engines both have pros and cons, which are worth considering when buying a car.
Now, let’s take a look within an individual cylinder. A cylinder is a sealed system that has a number of moving parts that are kept well lubricated with oil. Before we look at the actual combustion process, let’s take a moment to identify some of the key components of the cylinder. Here is a diagram of an engine cylinder, pictured at each of the four points in the combustion cycle (more on this later): 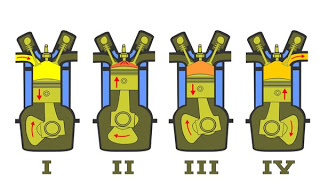 The exhaust and intake camshafts are the two ovaloid shapes at the top of the cylinder. They regulate the opening of the valves.

The valves are the two plugs below the camshafts. They open to allow fuel in or exhaust out; they close to seal the chamber during combustion.

The piston, the square, olive-colored part in the middle of the cylinder, moves up and down in the cylinder to compress the fuel-air mixture and move the crankshaft.

The piston rings (not pictured) create a seal between the piston and the cylinder. This prevents fuel from leaking out of the chamber and oil from seeping in.

The crankshaft, pictured in cross section at the bottom of the image, is a rotating shaft that converts the piston’s vertical motion into the circular motion the car needs to move forward.
The sump (not pictured) contains the oil that lubricates the system. It surrounds the crankshaft.
To power the car, these parts work together in a four-stroke combustion process. This is also known as the Otto cycle, after the German engineer Nicolaus Otto, who built the first car with this kind of engine in the 19th century (an interesting story for another day!)

This process occurs in four steps, or strokes: the intake stroke, compression stroke, combustion stroke, and exhaust stroke. First, remember that the crankshaft is turning throughout this cycle in order to move the piston up and down. Each of these four points in the cycle is illustrated in the image of the cylinder above.

INTAKE STROKE (I) , the intake valve opens. The piston moves down to allow the air and fuel mixture to fill the cylinder. The intake valve then closes, sealing the system.

COMPRESSION STROKE (II) , the piston moves back up to compress the fuel and air mixture in the sealed chamber. This increases the power of the combustion.

COMBUSTION STROKE (III) , a spark from the spark plug ignites the fuel and air mixture. Rather than “exploding” outright, the mixture burns. This causes the mixture to expand rapidly as gases are produced and heated. Since the chamber is sealed, the expansion of the mixture forces the piston down.

EXHAUST STROKE (IV) , once the piston reaches the bottom of the cylinder, the exhaust valve opens to release the exhaust, i.e. the “leftover” gases that remain in the cylinder after combustion is finished.
In a car engine, the cylinders work on staggered cycles. Basically, while half of the pistons are moving on a downward stroke, the other half are moving upwards. Since all cylinders are connected to the same crankshaft, the downward stroke of half the cylinders powers the upward stroke of the other half, and vice versa. Therefore, once the system gets going, it becomes self-sustaining.

So just how does the system get started? That depends on the starter system, which I’ll explain, along with the other components of the engine, in part two.

To learn more about this topic, or a broad range of subjects from “How To Change A Tire” to “How To Jumpstart Your Car”, visit DefensiveDriving.com’s Safe Driver Resources website!