When a car is said to have power steering, it means that the steering system contains a hydraulic component that amplifies the force exerted by the driver. This makes it much easier to steer the car. While it’s possible to drive cars without power steering, it can be very difficult to turn the wheels when the car is stationary or moving slowly; this can make maneuvers like parallel parking extremely difficult. Patents for power steering systems date back to the 1930s, but the first vehicle with power steering, the Chrysler Imperial, didn’t appear until 1951.

A power steering system requires a modified design for the rack and pinion gear. In this system, the rack contains a cylinder with a piston inside of it. Hoses pass from the pinion gear to both sides of the piston. When the driver turns the wheel, fluid moves to one side of the piston or the other, forcing the track rod right or left.

There are two other key components to this system: the rotary-vane pump, which provides the hydraulic pressure, and the rotary valve, which senses how much pressure to exert on the rack and in which direction.

Let’s start by talking about the pump, which is the simpler of the two components. The pump is connected to the engine by a pulley. As the engine spins, the pump turns and forces low pressure fluid from a reservoir into the power steering system at high pressure (See figure six). 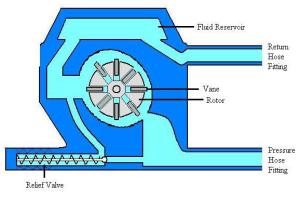 As the engine turns the rotor, the vanes, which can slide in and out, pull the fluid from the return (input) hose and force it into the pressure (output) hose at a higher pressure. Since it’s important that the pump be able to provide force even when the engine is idling, the pressure is magnified a great deal by the pump. For this reason, the pump has a built in release valve, which can siphon off some of the pressure should it become too much. This valve is connected to the pressure hose on one side; when open, it allows fluid from the output hose back to the return hose.

All the pump does, however, is supply the brute force needed to amplify the driver’s input. The amount of power provided and the direction in which force is exerted is determined by the rotary valve. The rotary valve has two components: the torsion bar and the spool-valve assembly.

The torsion bar is also connected to the spool valve assembly (see figure 7).

Figure 7: spool valve assembly
As you can see, the inner valve is connected to the input shaft (and the top end of the torsion bar), while the outer valve is connected to the bottom end of the torsion bar. As you turn the wheel, the inner valve and outer valve rotate in relation to one another. The amount of rotation (and direction) depends on the force exerted on the steering wheel and the direction in which the steering wheel is turned. As the valves rotate, the channels (orange, yellow, and green components) are brought into alignment with one another, so that pressurized fluid flows from the rotary vane pump to the cylinder inside the rack. Notice that the yellow channels send force to the right side of the rack, while the green channels send force to the left side of the rack. Depending on which way the valves rotate, force is thus directed to one side or the other of the rack.

Unfortunately, this power steering system isn’t very efficient, and a lot of energy is lost in the transfer of hydraulic power. Many carmakers are now investigating alternatives, such as the steer-by-wire system. This is an entirely electronic system in which the steering wheel functions more like a Wii controller, sensing motion and force and transmitting power to the wheels accordingly. This kind of system would reduce vibrations within the car, improve efficiency, and allow individual drivers to tailor the responsiveness of the car’s steering to their individual preferences. It would also provide a roughly 1 MPG advantage in fuel efficiency over traditional hydraulic systems.

Read Part One of this two-part series.