In case you haven’t heard:

Posted on May 3, 2010 by Defensive Driving Team | in My Kind of Driving 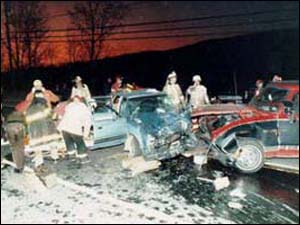 In Houston,TX news a father of 7 has pleaded guilty to drowning 3 of his children along with 2 other kids who were his relatives in an April 2009 car wreck.  He pleaded guilty to five counts of intoxication manslaughter for the April 18, 2009, crash in north Houston. He faces a maximum of five life sentences. Prosecutors alleged that Jenkins’ blood alcohol level was 0.079 some 2½ hours after the crash. He also tested positive for PCP and marijuana. PCP, or phencyclidine, can cause hallucinations and disorientation. His lawyer expected him to testify that he was not affected by alcohol or drugs and the he used the drugs “weeks” before and it had not caused the wreck. Quoted from his lawyer, “The evidence will show that it was an event where he loses control because of the weather and his attention being divided, having dropped his cell phone”.  None of the five children was wearing a seat belt or was strapped into a car seat. Their ages were: 11,7, 4, 4,and 1.
Lawyer uses soft word, ” Divided Attention” instead of what it really was.  Talk about your distracted driving!! DefensiveDriving.com’s state approved driver safety course discusses driving for all road conditions and weather, seat belt usage, proper mature driving skills as well as the affects of drugs and alcohol on drivers. It’s a shame he missed it.

← Should your car really be your office? | Pay attention to the “signs” →