Posted on October 28, 2011 by Defensive Driving Team | in My Kind of Driving 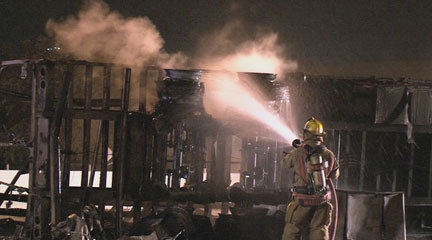 Texas— The mother of the driver who caused a fiery crash on the North Sam Houston Tollway sent her condolences on Saturday to the other victim’s family.”My heart goes out to y’all”, said Carolyn Steptoe. “You have me and my family’s condolences and we’re going to keep you all in our prayers.”The crash involving her son, Michael Winfield, happened on the tollway near North Sam Plaza around 2 a.m. Friday morning.

Authorities said the driver of a Ford Expedition, identified as 19-year-old Alexandria Flores, was paying a toll when Winfield’s rig came up from behind, hit a concrete barrier, went airborne and crashed into the toll plaza. The 18-wheeler then landed on top of the Expedition and burst into flames, trapping Flores inside.
Flores and Winfield were both killed. Winfield’s mother says she has no idea what could have caused her 45-year-old son to crash. Authorities believe Winfield could have been distracted, fallen asleep or had some type of medical problem while driving.

This a tragic accident that almost every driver is one step away from.  We have all been sleepy drivers, sick and medicated drivers as well as distracted drivers but we luckily got to our destinations.  All of DefensiveDriving.com’s state approved online driver safety courses go into great details about the affects of late driving and long road trips and how to potentially avoid these dangerous conditions.

← Give Yourself Extra Time to Avoid Rushing | Trick or Treat? →

Defensivedriving.com has a ShopperApproved rating of 4.7 based on 106511 ratings and reviews.