Something You Can Read in Traffic

Posted on April 28, 2011 by Defensive Driving Team | in My Kind of Driving

A potty-mouthed prankster managed to hack into an electronic sign in downtown Houston, treating drivers to an earthier message than their used to seeing.  The unknown prankster changed a temporary traffic sign that said “DETOUR” in large orange letters to “POOP.” The message was there for most of the weekend. Then on Monday morning, the sign was changed to “: ) LOL” before workers managed to change it back to its standard message.

The Texas Department of Transportation wasn’t amused. Spokeswoman Raquelle Lewis told the Houston Chronicle that hacking the onboard computer that controls the sign is disruptive. It’s also punishable by a fine of up to $500.In 2009, a prankster in Austin got national attention by hacking a similar sign to display the message: “Zombies in area! Run!”

This puts a new spin on distracted driving. 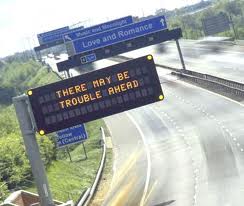 ← Drive With Courtesy, Not Arrogance | Don’t Forget about Adjusting Your Mirrors →