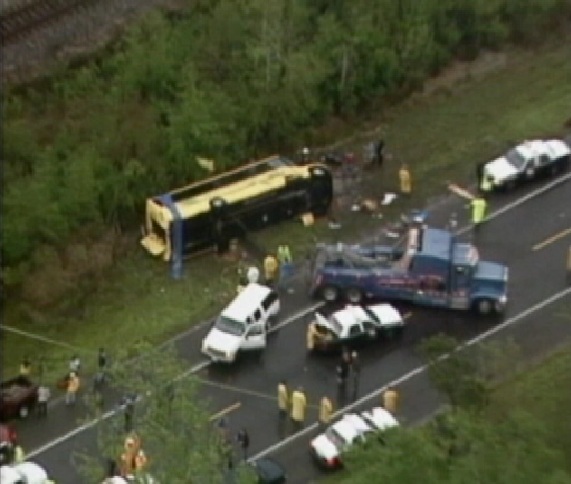 March 29, 2006 drastically changed the lives of a city, a high school, a soccer team and two young athletes.  Ashley Brown and Alicia Bunora were traveling with their soccer teammates on this rainy day when the school bus carrying the team swerved, trying to avoid debris from a truck and overturned.  There were no seatbelts on board.  Six years have passed since the day Brad Brown sat in a hospital waiting room, hoping to hear any news of his daughter, Ashley. One by one, crews brought in members of her high school girls soccer team, many badly hurt.”I waited for Ashley there to find her in whatever shape she was in,” Brown said. “I next saw Ashley at the funeral home.” Ashley and Alicia died that day.  For Steve Forman, the news was slightly better; his daughter, Allison, was one of those who survived, but she suffered severe injuries. “She was pinned under the bus,” Forman said. “Her left arm was crushed.”

Out of the tragedy and also to improve Driver Safety, the two fathers joined other parents to push a law requiring lap-shoulder belts — like the kind in personal vehicles – on all new school buses in Texas. The very next year after the accident, the state passed the law, which would later go into effect Sept. 1, 2010. The Legislature set aside $10 million to reimburse schools for buying new buses with those belts. Officials estimated that amount would strap in about 70,000 students in about 1,900 buses.

But the law went on the books just as Texas was facing one of its worst budget shortfalls ever. Gov. Rick Perry, who signed the seat belt bill into law, directed all state agencies to find ways to cut spending. In response, the Texas Education Agency slashed the School Bus Seat Belt Program from $10 million to $2.5 million. That meant requiring seat belts on new buses became contingent on state funding. If the money was available, districts could apply for the reimbursement of the seat belt cost only – not the entire cost of the bus.

TEA spokeswoman, Debbie Ratcliffe told KXXAN”The language in the law simply meant that those districts that did not receive the state grant funds were not required to purchase seat belts for new buses. Those that received the state grant were required to comply.” Outfitting buses with belts can be expensive, a challenge for many cash-strapped districts. The Austin Independent School District said a new school bus alone usually costs $60,000 to $70,000. Adding lap-shoulder belts is about $6,500 extra.

TEA said some withdrew their applications when they learned the money would only reimburse the cost of the seat belts. Other districts did not submit complete paperwork, which TEA noted with descriptions like: “calculations on Sched. 4B incorrect,” “assurances and certifications (not),” “minimal training info,” and “request for bus cost.””Some of the applicants did not meet all of the requirements of the program, such as the need for the board to adopt a written policy related to the use of seat belts,” said TEA spokeswoman DeEtta Culbertson.

More of the story coming soon.  You can see the original article here.

← How to Create space Around your Vehicle | Aggressive Driving: What You Need to Know →