Posted on November 26, 2010 by Defensive Driving | in Helping You Drive Safely

You may encounter many things on the road…people swerving in and out of lanes…making improper lane changes…not signaling…all can be very frustrating!  However, I believe I recently encountered the most frustrating of all driving situations!

This past weekend my friend and I with my two small children, set out for College Station to watch a high school playoff game where my friends daughter was cheering.  I was told by a friend to take a route that is different than I previously took when I lived further south in town.  Unfortunately, this route placed us right in the thick of a never ending line of traffic headed to the Renaissance Festival!  Since I drive over 2 hours a day in Houston traffic, I am not a novice of handling traffic congestion.  However, this situation takes the cake in my book…

My little girl said, “Mommy, I have to go potty.”  That prompted my little boy to say, “Mommy, I have to go potty too!”  Stuck on a two lane road with a center turn lane, it seemed like no big deal to get to the gas station I could see about a quarter of a mile ahead on the left.  Unfortunately for me and my kids, the traffic was NOT moving at all!  After listening to my children for a few minutes, I decided to do whatever I could to get them to a restroom before we had trouble in the car!

I pulled into the turn lane, and began to travel past the cars in the stopped lane of traffic to my right.  Apparently one car assumed that I was just making my own lane.  I was only about 100 yards from the entrance to the gas station when this car pulled out in front of me to block my advance.  OK, I thought, if the kids weren’t here, I might just scream, but instead I tapped on my horn to get the driver’s attention and after he looked at me in the side mirror, I pointed to the gas station.  HE WOULDN’T MOVE ONE BIT!  I honked again and pointed.  Nothing!  I laid on the horn.  Nothing!  I couldn’t believe my eyes!  Did this man really have such a problem with the situation that even ONE car getting past HIM would ruin his day?  OH MY GOODNESS!

Thankfully there were no oncoming cars in sight so I was able to get into the oncoming lane of traffic to go around this guy and pull into the gas station before we had issues in the car with the kids! 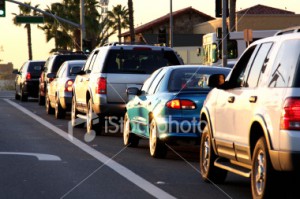 This man needs to take DefensiveDriving.com – the online driver safety course that teaches about everything from distracted driving to driving courteously to road rage and anything in between!

DEFENSIVE DRIVING IS NOT ONLY USED TO DISMISS TRAFFIC TICKETS!

← Happy Thanksgiving! | Were his last words so important? →