Cars are pretty miraculous machines. The way that the parts work together to transport people from place to place is a true engineering masterpiece. In fact, cars are so fantastic that there are a large number of Guinness World Records all about them. Here are just a few of the records so you can see just how incredible the little machine called a car can really be.

The Fastest Land-speed by a Car

What would you guess the record is for the fastest car? Maybe you would think 400 miles per hour, maybe even 500. But, no, the record is actually just over 763 miles per hour. Wowza! Try controlling a car at that speed! The record was set in October of 1997 by Andy Green from the UK. However, he set the record in the Black Rock Desert in Nevada. What car helped him break this record? The Thrust SSC, which contains two Rolls-Royce Spey 202 jet engines.

The Fastest Speed for an Electric Car

It is no secret that electric cars are definitely not for speed demons. Take this as the perfect example. The fastest average speed an electric car hit was a mere 303 miles per hour. Compared to everyday driving, that is pretty fast, but when you compare it to the speed mentioned above, it is not that impressive. The record was set in September of 2009 in a car that was built by Ohio State’s engineering students. It was called the Buckeye Bullet 2 and was driven by Roger Schroer from the United States.

The Fastest Speed for a Car When the Driver Was Blindfolded

If you thought driving fast would be scary, imagine not being able to see while doing it. That would take a lot of guts. But for Metin Senturk from Turkey, doing so was second nature. He has been blind in both eyes since he was three years old. Thanks to his supreme intuition, he was able to reach 182 miles per hour in a Ferrari F430. He did so on an airport runway in Urfa, Turkey in March of 2010. 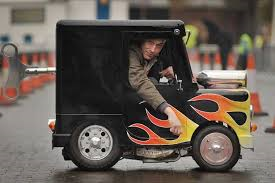 ← The Ins and Outs of Motorcycle Clubs [INFOGRAPHIC]… | Famous TV Cars: Where Are They Now? →