Do You Live in One of the Cities with the Worst Traffic?…


As you sit in rush hour traffic, yet again, you start to get frustrated. It seems like all you do these days is waste minute after minute sitting idly in your car. You start to ponder what you can do to avoid this situation. Maybe you can convince your boss to let you telecommute. Maybe you should just find a new job closer to home. You the wonder if all cities have this bad of traffic. Maybe you should just move to a completely new city. Then it would be better.

Rush hour traffic is an epidemic across the country. According to The Weather Channel, some people are spending the equivalent of 1.5 weeks of work time in their cars just waiting. That is a lot of unpaid time that could be much better spent doing other things. So do you live where the traffic is the most intense, or are you one of the lucky ones who could have it much worse? Here are five cities with the worst rush hours in the country:

Other top cities include Houston, Atlanta, Chicago, Philadelphia, and Seattle. If you live in one of these top 10 cities, you may want to consider relocating. You could save yourself a lot of time and money by doing so. Or you could just convince your boss that your time is better spent working from home or working a different schedule. Hey, it’s worth a try. You have a lot better things to be doing with your time.

If you do end up stuck in rush hour traffic, try to keep your cool. Drive defensively and remember that there is nothing you can do to control the situation. The last thing you want is added stress in your life. 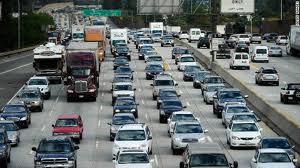 ← Do That Many People Really Die in Car Crashes?… | A New Way to Stay Safe on the Road →

Defensivedriving.com has a ShopperApproved rating of 4.7 based on 105052 ratings and reviews.