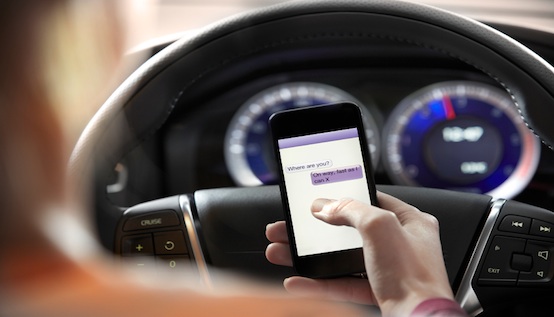 According to a recent study by the University of Houston and Texas A&M University Transportation Institute, when drivers are absent minded, emotional or texting while driving–they found that “drivers’ handling of the wheel became jittery with respect to normal driving.” The jittery steering that resulted in unsafe driving only took place in the case of texting. When driving absent-minded or emotionally charged, the jittery steering resulted in safer driving.

One of the researchers, Ioannis Pavlidis explains, “A likely explanation for this paradox is the function performed by a part of the brain called the anterior cingulate cortex, or ACC. ACC is known to automatically intervene as an error corrector when there is conflict. In this case, the conflict comes from the cognitive, emotional and sensorimotor, or texting, stressors. This raises the levels of physiological stress, funneling ‘fight or flight’ energy to the driver’s arms, resulting in jittery handling of the steering wheel.”

Furthermore, what makes texting more dangerous than when driving absent minded or emotional? “The driver’s mind can wander and his or her feelings may boil, but a sixth sense keeps a person safe at least in terms of veering off course,” Pavlidis said. “What makes texting so dangerous is that it wreaks havoc into this sixth sense. Self-driving cars may bypass this and other problems, but the moral of the story is that humans have their own auto systems that work wonders, until they break.”

As distracted driving becomes more of an issue, it’s important to know how our body reacts and why higher risk is directly related to distracted driving. For more driving news, tips, advice, stats and facts, check us out on our Facebook page, or take a driving safety course right here on our website.