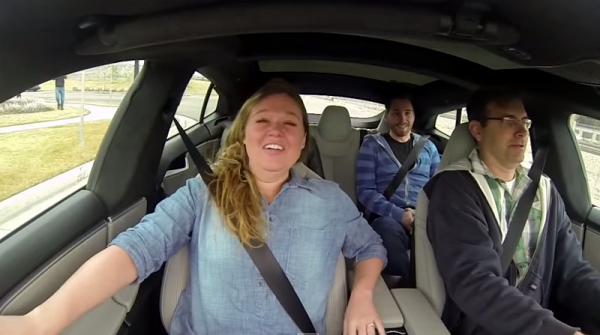 By now you have probably heard something of the exciting new Tesla Model S P85D. You might have heard of talk of the two electric motors that power it, perhaps you have heard of the 691 horsepower that these motors give, or the ability to 0-60 mph in just 3.1 seconds. But how much of the reality actually lives up to the hype? Well, to put this in perspective, the P85D acceleration time of 3.1 seconds makes it faster than a McLaren F1. So it’s pretty darn fast.

To put the Tesla to the test, we put some unsuspecting passengers in the P85D, and recorded their reactions as it went into insane mode. Check it out in the video below!

← Self Driving Cars: Still Plenty of Kinks to Iron Out as Google Reports 11 Accidents | The Fast and the Courteous: Why Being a Considerate Driver Pays Off →

Defensivedriving.com has a ShopperApproved rating of 4.7 based on 92856 ratings and reviews.