What To Do If Your Steering Fails

While total steering failure is very rare, it can still happen. Recently, a friend recounted to me what is perhaps the most dramatic steering failure story I’ve ever heard. Visiting South Africa during the World Cup, she took one of the country’s notorious “minibus taxis,” essentially a large van that picks up and drops of passengers along predetermined routes. These taxis are known for their powerful sound systems, aggressive marketing strategies, and lack of regularly scheduled maintenance (aside from upgrades of said sound system.) 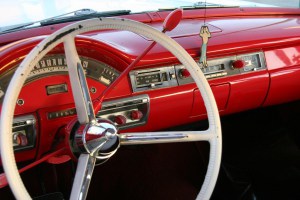 One day, she chanced to flag down a very old and rickety taxi with a particularly aggressive driver. After a harrowing five minutes hurtling down a busy road, the taxi driver turned sharply into a side street to drop off a passenger and, as he did so, the steering wheel came off in his hands. Luckily, the side street was empty and he was able to bring the vehicle to a safe, albeit abrupt, stop. My friend quickly decided to walk to her destination.

Hopefully, you will never let your car’s condition deteriorate to this point! However, steering failure can occur for other reasons and, in the spirit of being prepared, it’s good to know what to do in such a situation.

First off, there are two kinds of steering failure: total failure and a loss of power steering. I’ll begin with the latter, as this is more likely. In cars that have power steering, failure can occur for a number of reasons. The most likely is a leak in the hydraulics, which enable the system to function. If it’s a slow leak, you’ll start to notice a whining sound in your steering column and/or a gradual stiffening of the steering. If this is the case, you’ll hopefully have time to get your car checked out by a mechanic before steering functions are seriously compromised.

In the case of a fast leak, however, you could lose function fairly quickly. If this happens, the first thing that you, as the driver, will notice is that the steering becomes stiffer or “heavier,” i.e. the wheel is more difficult to turn. Hang on tight to maintain control of the car! You will still have steering control over the car, but it will be more difficult. Avoid the impulse to brake suddenly and bring your car to a very slow speed or stop, as manual steering will be more difficult at lower speeds. Instead, slow down gradually and, if possible, turn on your emergency flashers (or have a passenger do so.) Then, carefully make your way to a location where you can bring your car safely to a stop and call for assistance. Note that a failure in the hydraulic system may also compromise your brake system, so be prepared for brakes that feel stiffer or don’t function properly. You may need to respond to brake failure as well as steering failure.

Mechanical failures (like your steering wheel falling off) can also occur, although these are even more rare. In this case, you will lose all steering capability. In such a situation, you don’t have too many options. As with all emergencies, the key thing is to make sure that you remain calm. Think clearly, respond appropriately, and avoid panic.

If your steering fails, you will need to stop as soon as it is safe to do so. If you are in an area without much traffic and conditions are dry, brake as quickly as possible. If it is wet or icy, try to pump your brakes and downshift to avoid skidding, since you won’t be able to steer to correct a skid.

If you are in a heavily trafficked area, such as on a highway, first try to alert other drivers by flashing your lights, honking, and gesturing with your hands. At night time, flick your high beams on and off. Once you’ve done this, begin to slow down gradually (if possible) so that other drivers have time to respond. Try to use a combination of downshifting and braking to gradually bring your car to rest on a shoulder or near a divider–anywhere you can stop in relative safety. Then, move away from your car and call for help.