How to Get a Car Unstuck from Mud 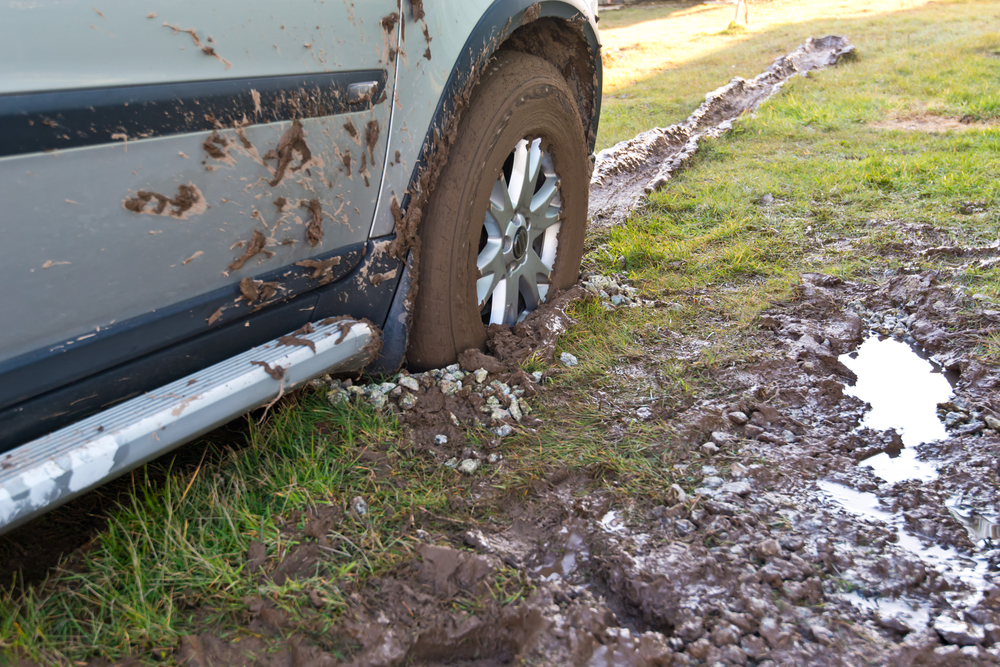 Roads were made for driving, and cars were made for roads. Over the years people have worked hard to make sure that we have the most pleasant driving experience possible, but sometimes you face that unfortunate situation where your woefully ill-equipped car gets stuck in a puddle of thick mud, some slippery snow, or even a sandy beach. When this sort of situation comes about, it is important to know what to do, because how you approach it could be the difference between getting unstuck in a couple of minutes, and waiting hours for a tow truck.

As such, here are some tips for when you get your wheels stuck in some mud.

Well, simply panicking won’t necessarily have a negative effect, unless you act rashly as a result of that panic. For example, if your first instinct is to slam your foot on the accelerator, you are going to run yourself into a much deeper rut, both literally and figuratively. So if you feel you are going to panic, try and compose yourself first and foremost, get out of the car to assess the situation (if possible) and then decide what to do.

slow and steady does it

As mentioned, slamming your foot on the pedal is the last thing that you want to do. Instead, try to gently accelerate out of the rut, perhaps rocking the car a little as you go. If you are lucky, you will ease out of the mud, and you won’t have to take any further action.

If that doesn’t work, the next best course of action is to seek help from either a passenger or a kind passerby. You will want to use the same method as before–slowly accelerating and rocking–only this time there will be others pushing to help you out of the initial dip. Once again, be careful not to accelerate too hard, as now you have another potential problem in that you will splatter your helpers with mud.

The main reason why your wheels are stuck in the mud is probably as a result of a lack of traction. If you can create some tread around the wheel or wheels that are stuck, you should have a better chance of getting out of the mud. Look around for twigs or leaves, anything you can lay in front of the wheels. If you want to be prepared for future times when you might get stuck in the mud, cat litter is actually an excellent tool in this situation. Other things that might help create traction around you could be an old coat or piece of clothing, a car mat, a blanket, gravel a board, or even a piece of cardboard.

After you have tried all of the above, and it still hasn’t worked, you might have to simply admit defeat. Call for a tow, or ask a friend, and maybe in the future simply stay away from that area in the future!

For more tips and advice, check us out on Facebook.

← Is the Smart Watch Good or Bad for Distracted Driving? | When Cars Fly (or Donâ€™t): 6 Car Innovations that Never Caught On →